In 1828, when Dingane kaSenzangakhona succeeded Shaka as Zulu king, he established uMgungundlovu in the eMakhosini ritual heartland of the kingdom, and near a number of other garrisoned royal establishments, or amakhanda.  Located on a gently sloping hillside in the wooded savannahs of the middle White Mfolozi catchment, uMgungundlovu was the largest of these amakhanda. When completed it comprised about 1500 thatched dwellings circling around a huge open cattle enclosure. It was the primary royal residence of King Dingane and his domestic household, with accommodation for his principal advisors, visitors and regiments.

UMgungundlovu was the political pivot of the region, a dynamic hub of constant movement of people and information. It was the place of assembly of the king’s councillors and the great figures of the realm, where intelligence reports were accumulated and considered, and matters of state decided. Foreign embassies, travellers and traders were received there. Among them were emissaries from the Swazi king and the Portuguese at Maputo, baSotho traders, itinerant hawkers, foreign medical and ritual specialists, European missionaries and trekboers. From its gates, envoys and spies were despatched to distant lands. 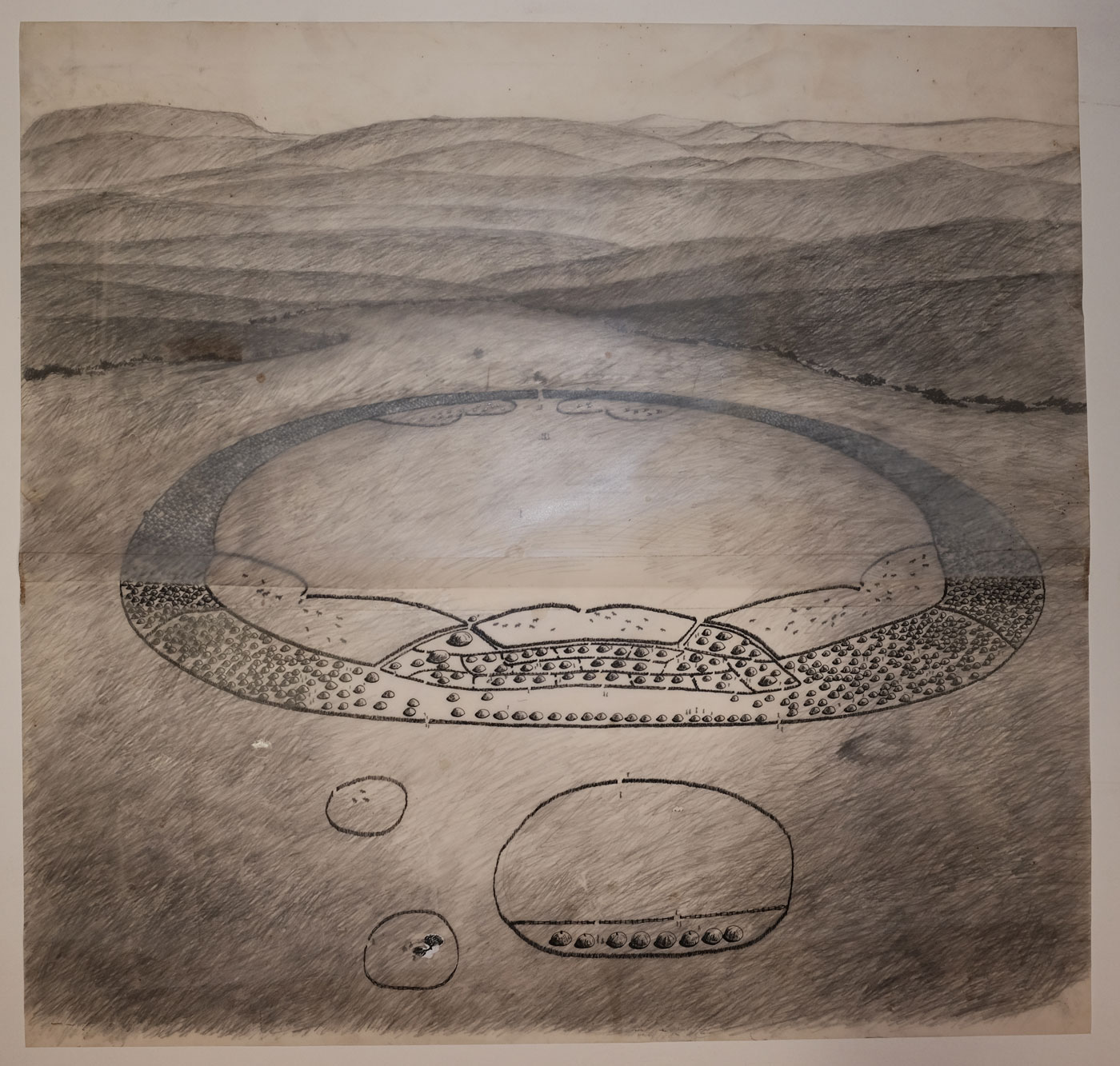 Testimonies differ on the nature of some key components of the settlement, such as the isigodlo – the quarters of the royal women. Over time, parts were rebuilt and their place changed, including the royal household where access was rigidly controlled. Take a glimpse of the ongoing research by Frans Roodt and John Wright.

Senior women were prominent figures at uMgungundlovu. They played important roles in the political decision-making that went on, and in the management of the large royal household of women. The household included the young women of the umndlunkulu whose strategically significant marriages would be arranged by the king.

Luminaries and local chiefs alike arrived to tender allegiance and offer tribute. They were attended by young boys who carried their mats and looked after their living needs. The amabutho who assembled there performed labour for the king and competed fiercely in displays of valour.  And when the situation demanded it, they prepared for war. Heroes were admired; bravery and praises were extolled.

In the Eyes of Those who Were There

While still a youth Thununu kaNonjiya Gcabashe of the Qwabe was picked out by Dingane to become one of his izinceku, a trusted attendant. Thununu, along with fellow izinceku, Ngidi kaMcikaziswa of the eLangeni and Sivivi kaMaqungo Malunga, spent long periods at uMgungundlovu in the service of the king’s household. Likewise, Lunguza kaMpukane Mthembu visited uMgungundlovu a number of times, first as a mat-bearer for his father, and later with his regimental ibutho in the king’s service. In their old age these four men left  detailed first-hand accounts of life at uMgungundlovu. These accounts can be found in FHYA’s James Stuart Archival Curation or by using the individual links above. Material from their accounts of life at uMgungundlovu appears in isiZulu in an early school reader, uKulumetule compiled by James Stuart in 1925 (London: Longmans, Green and Company, 1925). An English translation of relevant passages by John Wright is available here. You can also listen to podcasts based on their accounts, and to a musical composition inspired by a visit to the site in 2019.

News of uMgungundlovu travelled far and wide. In Lesotho, on the other side of the Drakensberg, the Paris Evangelical missionaries, Eugène Casalis and Thomas Arbousset, collected news about uMgungundlovu from amaZulu and baSotho who had lived under King Dingane and had then relocated across the mountains. In 1842, in Paris, Arbousset published some of these accounts concerning the trade route that led from Thaba Bosiu to the Zulu capital. The accounts are to be found in his travelogue which is available here in both French and English. You can find out more about these accounts and the trade route between uMgungundlovu and Thaba Bosiu in the digital curation “A Small, and Scarcely Perceptible Pathway to uMgungundlovu”.

During the 1830s, the earliest Christian missionaries arrived in the kwaZulu region. They visited the capital and one, Rev. Francis Owen, was allowed by the king to teach at uMgungundlovu between 1837 and 1838. Accounts by Owen and of fellow missionary, Allan Francis Gardiner are available in EMANDULO’s FHYA Depot on this site. A statement by Dingane’s boy interpreter William Wood is also available.

In the late 1830s trekboers moved into the region and sought to negotiate access to land from the king. In the course of this, a party of trekboers was killed at uMgungundlovu. At the end of 1838, after a retaliatory trekker attack, the settlement was torched on the orders of the king.  Later, the Trekkers joined forces with Dingane’s half-brother, Mpande, to defeat the king, who was then succeeded by Mpande in 1840.

Among the finds there was an isiCoco polisher, a blue-grey stone possibly used by Zulu men to polish their iziCoco, the head-rings. A visual essay by archaeologists Justine Wintjes and Gavin Whitelaw centered on this item can be found here.

The site, and more especially the surrounding eMakhosini area, in which the graves of the Zulu kings and their ancestors are concentrated, holds a special place in the history of the Zulu royal house. EMakhosini has long been the site of sacred rituals, and today is still regarded with great respect.

In the early twentieth century the area became white farmland. The farm on which uMgungundlovu was situated bore the Afrikaans name  “Moordplaas.” In 1922 the South African government erected a memorial on the adjacent hill of KwaMatiwane commemorating the trekboers who were killed there in 1838. UMgungundlovu was proclaimed a monument by the Historical Monuments Commission in 1936. Along with local battlefields, the site became a target of trophy hunters and collectors who scoured it for material remains. The FHYA digital holdings include some materials collected in this way from uMgungundlovu, such as those assembled by Reverend P. Stander. In 1969 the Historical Monuments Commission was replaced by the National Monuments Council, and in 1971, the site was taken over by the KwaZulu Monuments Council. In 1997 the newly created provincial heritage agency, Amafa, took over the site. It is now part of the eMakhosini Ophathe Heritage Park under the control of the Ulundi municipality. You can see uMgungundlovu on the map here.

Presentation initially prepared and produced by Ettore Morelli for FHYA in 2020. Page designs by Studio de Greef. The isiZulu versions were produced by Sizakele Gumede. Our presentations are archived here. If you wish to make a contribution, use this link.